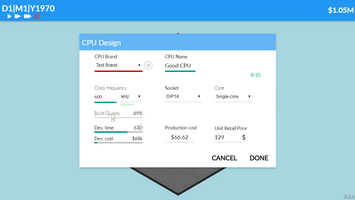 Note: old saves might be incompatible with this update.

Let's go over the most important changes:
History redo + ability to check your CPUs' components
It's way more practical than in previous versions and it looks better too. Not much to describe here, just see for yourself: 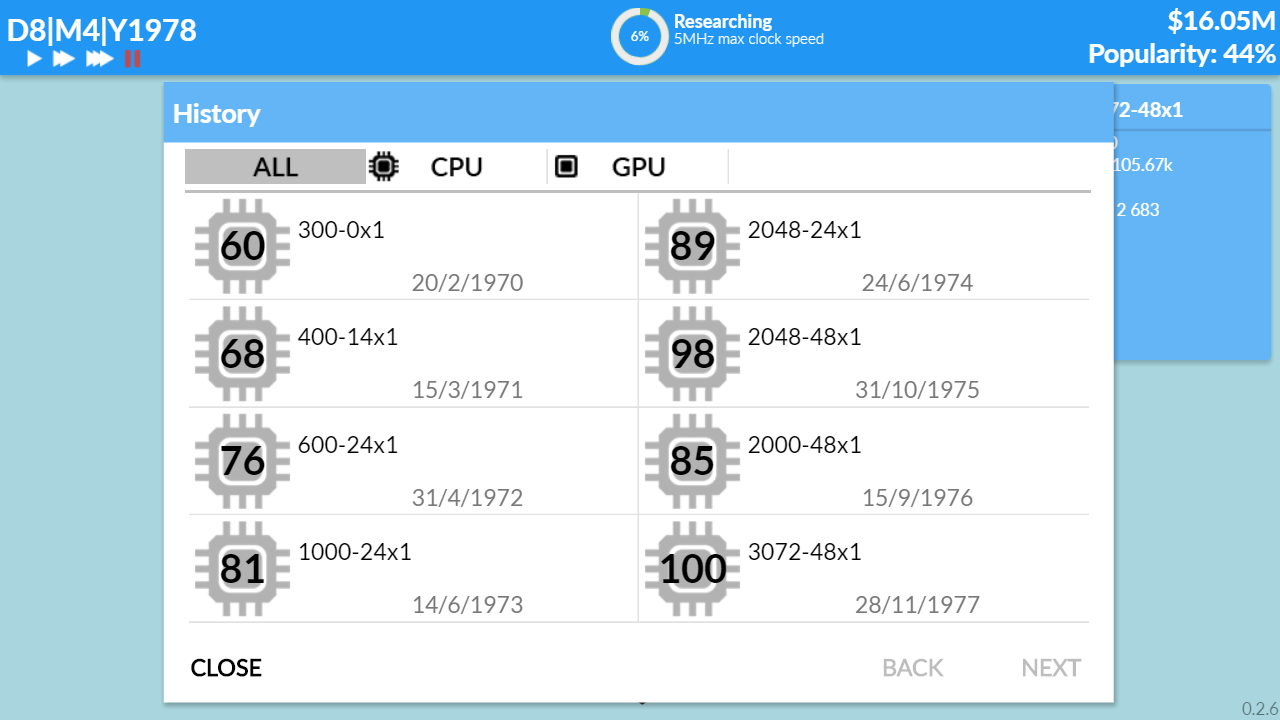 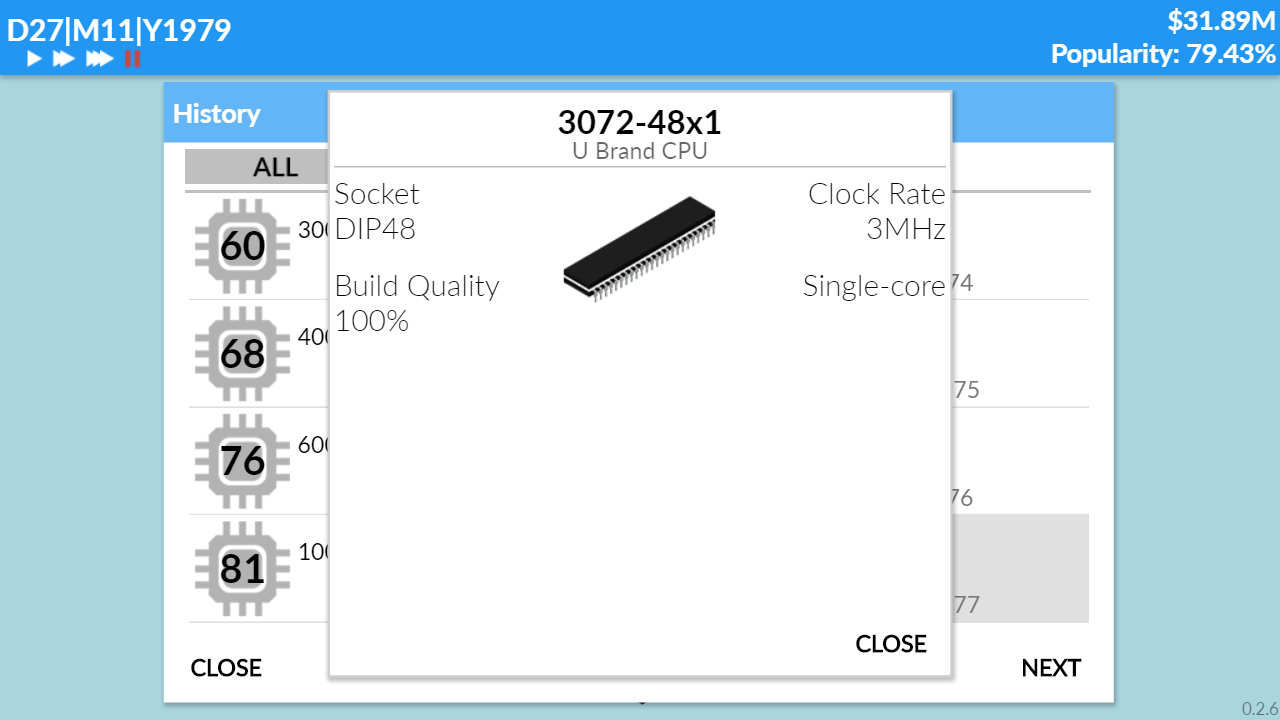 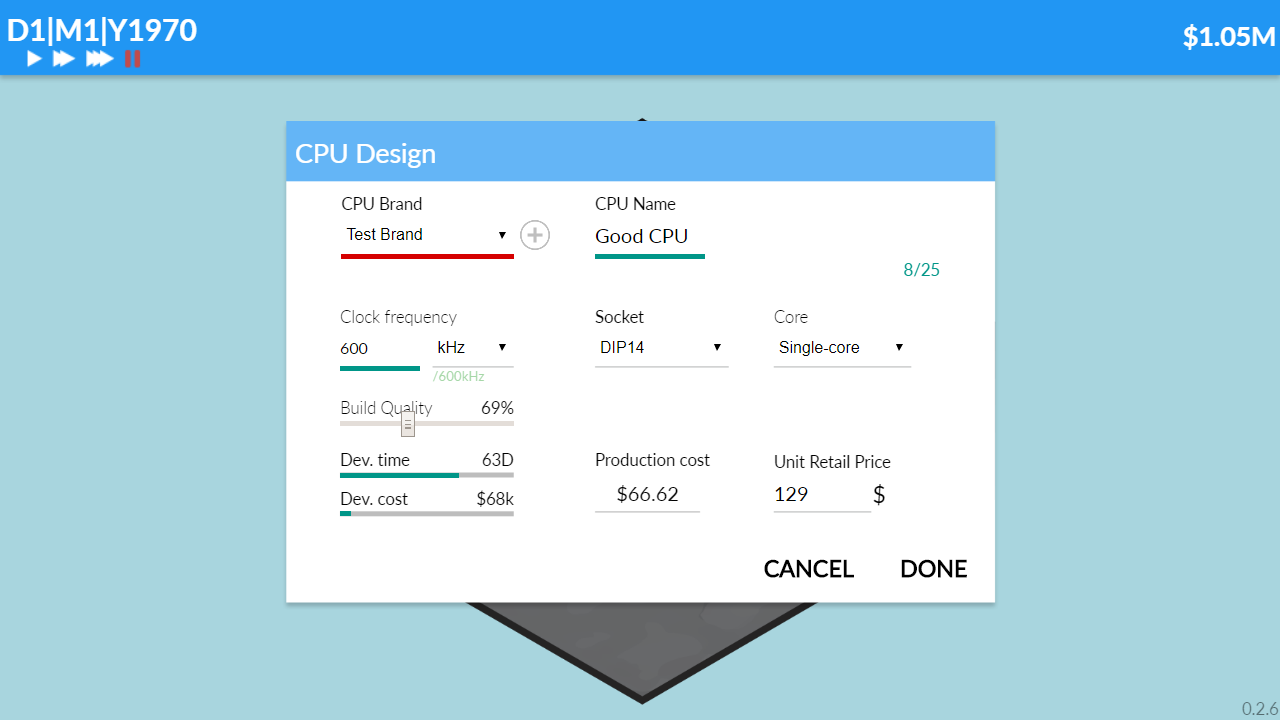 For some reason the dropdown menu isn't visible on the gif :/
Right now there isn't too much to this feature, but I'll expand on it in future updates. For now it's just a way to name and keep track of your CPUs better.

Music
There are now 9 high quality tracks by Kevin MacLeod, which you can mute at any time and listen to your K-Pop instead if necessary.

It basicially means that marketshare now updates daily and you don't have to reopen it each time. I've also improved the market a little and it should be less buggy. I still want to improve some stuff, like assigning one permanent color to each product.

Improvements to sale formula
In theory it should make it harder to exploit, more balanced, fair and easier. But that's just a theory.

Important changes to code
While not a feature itself, it's an important step for other features to be implemented, most noticeably selling many CPUs at once. It'll make 'coding' take more time, but allows me to do more stuff. Thanks to it we have better history.

That does it for the stuff I wanted to highlight in this update. Of course there are more, less important things. If you want to see what else has changed head over to the wiki! (Or you can just check the in-game changelog, but it's harder to read)

What to expect in the next update
It really depends, I might redo marketing and bank or creation next, or 0.2.7 might turn out to be a tweak/bug fix update, nothing is sure.

And now I want to give a  shoutout to all the guys from my Discord server who beta-tested this version! If it weren't for them I'd probably have to rush out some hotfixes...
Speaking of my Discord server, you can join it here. We have some new channels and stuff!
It feels nice to be able to get closer to the community, and I've never recieved so many ideas before, thank you all for engaging and supporting the game!

Thank you for all your support so far! Let's hope 0.2.7 comes out this year.

Thank you! This update made this game a lot more playable, espcially the fact that I can set my clock speed in one click. XD

I hope we could see the "selling many CPUs at once" feature a lot sooner, anyway, It's a lot of fun to play this game, thank you for making it :)

YES! i wait so long for this. the game just needs  + cores and hardwares

There's still a lot to do before I add more hardware, but it'll come eventually!

5 months later, Cof Cof, join the discord for HT modding and to get raped